“Have you ever wondered why monkeys have such a reputation for being mischievous?  Well, quite frankly, it is a title well deserved…
Monkeys lie to each other.  When searching for food, monkeys often travel in groups with a leader at the front.  If this leader has a dishonest streak and discovers a delicious treat, sometimes they will tell their fellow monkeys that they’ve seen a predator.  All of the other monkeys will scatter to safety whilst the leader casually gobbles the treat alone.  Sneaky little devils!”
One of the challenging things about reading with children is that they expect you to have all the answers to their questions.  But in Mad About Monkeys, written and illustrated by Owen Davey, questions are answered before they even think them up.   This gorgeous and informative book is a delight from cover to cover.

The book defines monkeys, when they evolved, their habitats and what they eat. 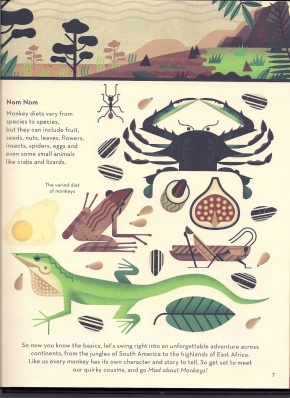 Davey’s writing style is engaging and conversational as he explains the differences between Old and New World monkeys, how monkeys socialize, their size and peculiarities.  He gives a brief look at monkeys in mythology. 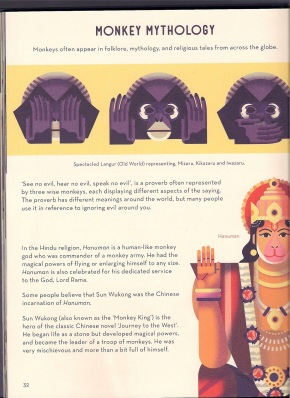 He ends with a sobering but hopeful look at the shrinking habitat of monkeys due to deforestation.
Davey even answers questions kids might be too embarrassed to ask, such as “Why such colorful bums?”  In my case, the question lead to much hilarity in discussing the difference between American and British English and the many words there are for bottoms.

The stylized illustrations are warm and detailed.  Text and pictures are interwoven, so it’s easy to get immersed in the page.  My scans do them no justice, you really must see them live — luckily that’s as easy as going to your bookstore or library.  This book would be a wonderful gift for a reluctant or avid reader — it works on many levels.
It’s published by Flying Eye, so the design is exceptional, with compelling end papers and title page.
On his website, Davey says:
“I am an award-winning Freelance Illustrator, living & working in Leicester, UK. I have a First Class BA(Hons) Degree in Illustration from Falmouth University. I am the illustrator for the fiendishly addictive puzzle game TwoDots which has been #1 in over 70 countries. I was also the illustrator for Tinybop’s brilliantly fun Robot Factory app. My work has been published in every continent except Antarctica, including picture books in UK, America, Australia, Germany, France, The Netherlands, Portugal, China & South Korea…. In my spare time, I write and play in a band called LOM, bake cakes & quickly consume them, swim & run, play nerdy computer games, read books intended for teenagers or children, and watch a variety of HBO programmes in my pyjamas.”
I recently bought the book Build A Robot: Build 3 Wind-up Robots That Walk, Wiggle and Wave, by Steve Parker, that Davey illustrated and designed cardboard robots for.  Published by Templar books in 2014, it was a great hit with one of my video game addicted 10 year old friends.  The book has history of robots, integrates the illustrations with the text  and it has the excellent interactive element.  So far, my friend and I have built two of the robots and he’s totally sold on the idea of interactive books – since when you finish the challenge of building the robot, it’s something real that you can play with even when your mom won’t let you have any more screen time.  And the designs are fantastic. 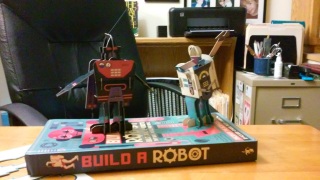 From monkeys to robots, Owen Davey is definitely an illustrator and writer to look out for.