I haven’t always had a good relationship with my brain.  I developed neurological problems when I was 16, including epilepsy and muscle deterioration.  At the time, back in 1976, they didn’t have things like MRIs and my condition remained a mystery most of my life.
My second neurologist gave me the diagnosis of “abnormal,” which I will always be proud of.  My condition is still a mystery but I now know I have a lesion in my spine, and I have a diagnosis of Transverse Myelitis.  I no longer have seizures, but I have some cognitive blips, and wrestle with fatigue, depression, and occasional mania.  For awhile, I was pretty sure my brain was trying to kill me.
Luckily I found the books of Dr. Oliver Sacks.  His work made me feel like I would eventually understand my brain.  More importantly, he has such a profound respect for “abnormalities” and all the ways the brain overcomes damage, regenerates itself, and creates new modes of perception, that I began to think my brain and I could be friends.
I’ve recently fallen in love with the book Neurocomic by Dr. Hana Ros and Matteo Farinella, beautifully published by Nobrow this year.  It combines all the best elements of science, art, humor, story and information.  It illuminates the brain in new and wonderful ways.

The book opens with a man who starts to flirt with a woman then finds himself sucked into her brain.  His quest is to get back out so he can continue to pursue her.  He has no idea where he is and wanders through a neuron forest until he runs into Santiago Roman y Cajal, a “Spanish neuroscientist and Nobel Laureate (1852-1934)…considered as the father of neuroscience, although he always had a great passion for drawing.”
Thus begins our hero’s journey through neuron forests, memory caves, and castles of deception.  Along the way, he runs into pioneers of neuroscience who seem to delight in sending him into even more mysterious places.  It amused me to think of neuroscientists spending eternity studying inside a living brain.  Is that heaven for them?  The scientists are only the beginning of the zaniness.  There’s a giant squid seeking revenge for experiments on its giant axons.  There’s an aplysia snail playing banjo.  We run into Pavlov and his dog.

It’s an altogether engrossing and entertaining way to learn about the brain.  We often see science as stuffy and serious, but this book injects so much playfulness and humor into neuroscience, that it’s an irresistible way to learn.  The drawings are lively and expressive.  I love the playful way brain functions are characterized.
Dr. Hana Ros is neuroscientist with a PhD from Oxford University.  Matteo Farinella is an illustrator specializing in graphic journalism and scientific illustration.  Farinella received a PhD in neuroscience from the University College in London.
The story format helps illuminate both what is known and how much is still not known.  It’s a mysterious world, the world of the brain, and Neurocomic celebrates that mystery as much as the science.  Ros states in a video about the book that it’s difficult to explain what’s going on in the brain without the use of metaphors.  That our brains can make metaphors is miraculous to me, and that we can understand so much more about everything in terms of story and metaphor is, I think, the most comforting thing about this book.
The other comforting thing is the book itself.  Nobrow has done a stellar job in publishing it.  It’s a delight to hold and behold.  I worry that the era of beautiful books has come to an end with ebooks, but publishers like Nobrow are putting those fears to rest.
Nobrow started 2008 in the UK, with the aim to provide an independent platform for graphic art, illustration and art.  It’s become a leading proponent of quality in book design and a standard bearer for original creative content in print publishing.
Neurocomic’s cover and spine are embossed with gold and silver ink.

It has beautiful endpapers.

One of the problems with graphic novels is picture size.  Often the panels are so small, you lose impact.  Neurocomic has big panels and whole pages devoted to one frame. 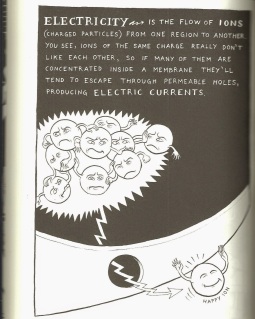 It’s a charming way of learning a complex subject, and invites re-reading.  I think I’ll take it with me to read the next time I go to the neurologist.

To learn more about Neurocomic, click here.  There’s a great video of the authors done by The Guardian here.
To see more amazing books by Nobrow, click here.
If you missed my last post on the poetic astrophysics book, The Edge of the Sky by Dr. Roberto Trotta, you can read it here.
Remember, books make the best gifts.  If you liked this post, please feel free to share it.