In 1959, Alabama Senator E.O. Eddins tried to ban the book The Rabbits’ Wedding by Garth Williams in his state’s libraries and schools.  Garth Williams was the beloved illustrator of such books as Charlotte’s Web, Stuart Little and the Little House series.  His book The Rabbits’ Wedding, written for children ages 3-7, showed the marriage of a white rabbit to a black rabbit.  Senator Eddins and the White Citizens’ Council of Alabama were outraged that it promoted interracial marriage.  Librarians, great heroes all throughout history, fought this.  While the fear mongers didn’t succeed in an outright ban, the book was put on special reserve shelves.  Williams was surprised by the controversy and said, “I was only aware that a white horse next to a black horse looks very picturesque.“
At the time, there were 17 states where it was illegal for people of different races to marry.
Nevertheless people of different races were falling in love.  In 1958, Richard Loving and Mildred Jeter did so in the little town of Central Point, Virginia, one of those 17 states. 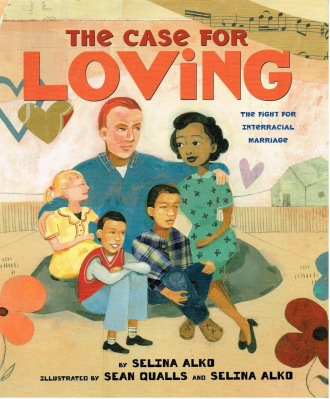 Their marriage and their determination to live in Virginia as husband and wife is the subject of The Case for Loving: The Fight for Interracial Marriage by Selina Alko, illustrated by Sean Qualls and Selina Alko.  It will be released for by Arthur A. Levine/Scholastic books on January 27th, but many booksellers are taking pre-orders for it.  Everything about this book is compelling.  It’s marketed to ages 4 to 8, but it’s really appropriate for all ages.
Richard and Mildred got married in Washington, D.C., but when they came back to their hometown to live, they were arrested – pulled from their bed – for violating the state’s law against interracial marriage. 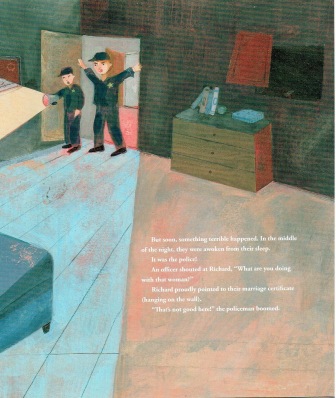 They moved back to D.C. and took the state of Virginia to court.  The case went all the way to the Supreme Court before Virginia’s law, 9 years later, was found to be unconstitutional.
I think, as a nation, we don’t like to acknowledge the more troubling aspects of our history.  But the stories therein are full of heroics.  A clearer picture of who we are as Americans is buried in the places we’re afraid to bring to light.  The more we know about and talk about our history, the more we understand the problems and tensions we see around us.  Only then can we appreciate the true beauty and complexity of life. 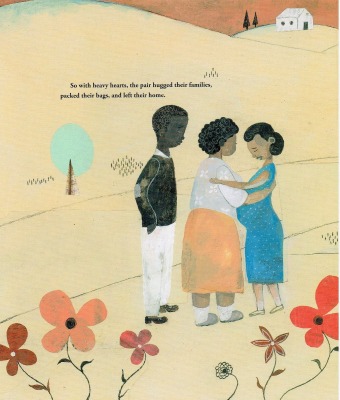 The Case for Lovingis a celebratory story of a strong family.  The expressive illustrations are strewn with hearts and flowers.  The power of love, kinship and family comes through in every page.  Racism shows itself to be strange and alien and unfair.  The writing is subtle, but you can tell what a strain the fight was on the Lovings, because they were so afraid they would lose the case, they stayed home when it was presented to the Supreme Court. 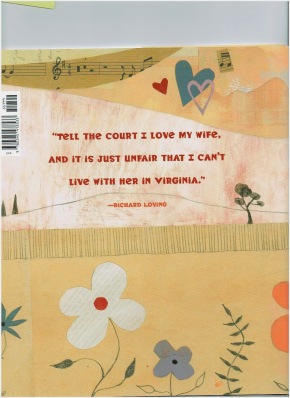 But they did win.  And although there are still people who talk about the need for “the purity of the white race,” cases of love keep breaking out everywhere.
The author and illustrator, in fact, are an interracial couple. 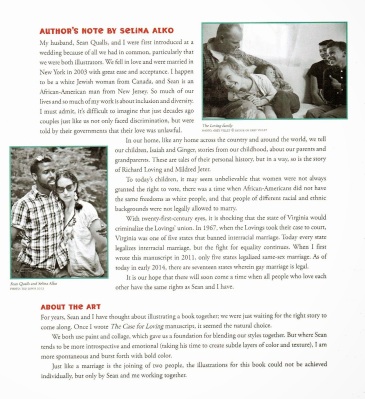 I wanted to review this book on Martin Luther King, Jr. Day, because it speaks so eloquently to King’s dream.  I’m a white woman who was born in Memphis in 1960 and saw the changes that took place in our divided city because of King and the people who believed in his dream.  His assassination didn’t stop that dream.  In 1972, I was bused to an all Black junior high school.  I had amazing teachers, wonderful friends, and learned a lot of new dances.  It was such a liberating thing.  I heard lot of racist talk from my white relatives, but NONE of it was true.  I know we have a long way to go until people are willing to see across the colorline, but I’m not caught in that kind of fear.
I’ve been helped so much by African American doctors, teachers and friends.  And I know it’s because every day heroic people like the Lovings helped move our legal system forward.  And heroic leaders like King gave us all a dream.  And people like Alko and Quall are celebrating stories and illustrating how we can all learn to live and love together.
Back in 1959, in the midst of the storm over the book The Rabbit’s Wedding, Garth Williams said, his story was not written for adults, who “will not understand it, because it is only about a soft furry love and has no hidden message of hate.” 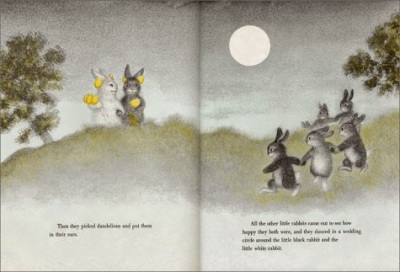 Both children and adults will understand The Case for Loving’s strong message of hope.  It’s a book that makes it easier to understand the world as it is, and the power of love. 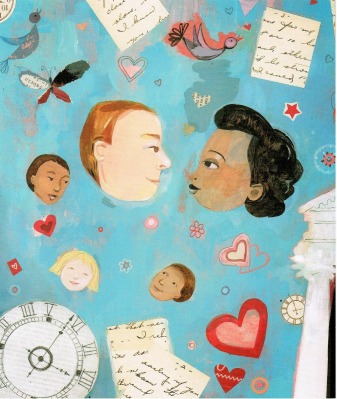 Selina Alko is the author and illustrator of several acclaimed books for children, including Daddy Christmas & Hanukka Mama and B is for Brooklyn.  Sean Qualls has illustrated many celebrated books for children, including Giant Steps to Change the World by Spike Lee and Tonya Lewis Lee, Little Cloud and Lady Windby Toni Morrison and her son Slade.  He received a Coretta Scott King Illustrator Honor for Before John was a Jazz Giant by Carole Boston Weatherford.  They live in Brooklyn with their two children.
You can find Alko’s website here.  And Qualls website here.  You can read a Publisher’s Weekly interview with them about the book here. 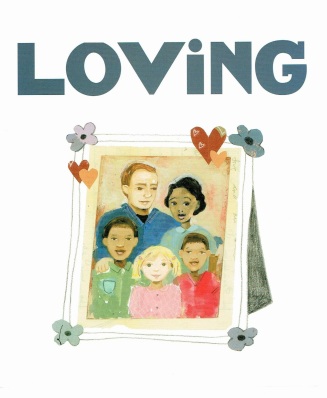 Thanks for reading my blog and let me know what you think.