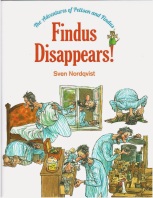 There’s nothing more delightful than finding a storybook that is visually engaging, tells a funny story, has great characters and a good plot.  Findus Disappears! (The Adventures of Pettson and Findus) by Sven Nordqvist, published by NorthSouth Books, 2014, is that book.  Nordqvist is a Swedish writer who wrote and illustrated a series of books about Pettson, a forgetful and eccentric old farmer and his cat, Findus.
Findus Disappears!tells the story of how Findus came to be Pettson’s companion (he’s so much more than a pet.)  Pettson’s a lonely old farmer.   His neighbor suggests he get a wife, but Pettson is daunted by that thought: “I’m too old now.  A whole woman – that would be too much.”  So the neighbor brings him a kitten in a box labeled “Findus Green Peas.”  Pettson names the kitten Findus and thus begins a charming story filled with humor and magic. 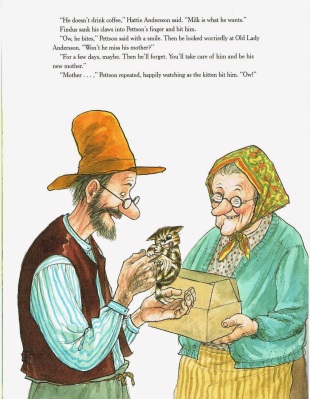 The illustrations are astonishingly imaginative and beautifully executed.  In Pettson’s world there are strange creatures peeking out of cups and hanging from lampshades.  His house and farm are furnished with unique objects like nails hanging on a clothes line, melting pencils, giant teapots and tiny teacups.  His bed side table has skis.  Chickens roam the house.  The salt shakers is hung by a rope under the radio.
Findus seems like a normal enough kitten until he sees a clown in the newspaper that Pettson is reading.
Findus looked for a long time at a picture of a clown in big striped pants.
“’I want pants like that,” Findus said.
Pettson stared at him.  These were the cat’s first words.
“Then you shall have some,” the old man said.  “I’ll sew you a pair of pants right away.”
These were the kitten’s first words but not his last.  He becomes a chatty, playful friend to Pettson and fills the emptiness in his life.
Findus explores the house and sees creatures — mumbles, they’re called — that Pettson can’t see.  (The mumbles hide Pettson’s socks and move things around.)  Findus gets more and more brave about exploring the farm, but one day he gets frightened by a creature he’s sure is looking for kittens to eat.  He has to hide, and then he gets lost.
When I read this story to kids at my community center, they kept scooting closer and closer to me, they wanted to see everything and they wanted to know what was going to happened next.  They asked that the book be passed around so they could see it up close because the illustrations are so compelling.
Nordqvist’s said he is inspired by the delights of everyday life and that delight is very present in the details of each page.  Each time you look at one, you’ll find a hidden world – steps going up the stem of a plant, giant apples, and mumbles hiding everywhere.
Nordqvist also said these stories were inspired by his loving observations of his two sons when they were younger.  His appreciation for childlike antics and nature and imagination all shine forth in his work.
NorthSouth Books plans to publish a whole series and I look forward to reading them.  And so do the kids I read to.  This story is a pleasure in all regards.
NorthSouth Books publishes beautiful books by international authors and illustrators.  Check out their catalog here.

Thanks for reading my blog.  I appreciate any comments.

3 thoughts on “The Delights of Pettson and Findus”