My 8 year old neighbor Noah was amazed to find out I knew all about Godzilla.  I’ve known him for about two years now.  We live in a community called Bridge Meadows, which is set up to support families adopting children out of the foster care system.  Part of that support is playing with the kids.  When I moved in the neighborhood, Noah was very impressed with my fabric sculpture of the Seeing Eye Dragon: 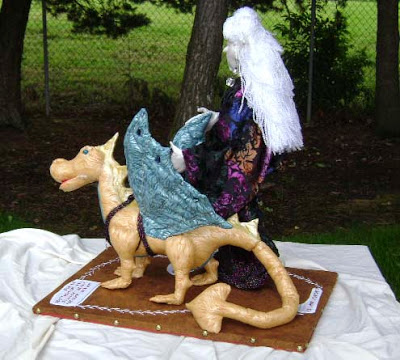 We often draw together, mostly dragons at first but now he likes to draw video game and cartoon characters.  This summer we started playing build a monster, which is a game where he draws one part of a character and I draw the next.

I have a small collection of toys — including a dragon and various robots and weird creatures.  My son, age 30, recently added to the collection, including a figure of Gamera, the Godzilla like turtle from the Japanese monster movie craze of the 60s.  When Noah saw Gamera, he said it looked like a Godzilla monster.  It was then I got to share what I knew about  giant zillas. He set up a battle between Gamera and the other toys right away.

Boys are so attracted to battle games and super heroes, good monsters and bad monsters.  I think it’s the way they deal with feelings of powerlessness and they can find some sense of order and control in this kind of play.  I don’t play video games with kids and rarely watch movies or such with them.  But if they want to create monsters and try to figure out good and evil through drawing, painting and storytelling, I’m all about that!  Those are the tools I use to deal with powerlessness.

Yesterday, Noah told me he found his Godzilla toy, but the leg was missing.  He’d looked all over for it.  He has lots of toys in his room, and he has three brothers, so it’s pretty easy to lose a leg in such an environment.

I told him if he found the leg, I’d try to re-attach it and if he didn’t, I’d try to make something that would work as a leg.  So he showed up with his legless red monster who used to roar and fight for good but now couldn’t stand up.  We tried looking for another old dinosaur toy we could harvest a leg from, but none were big enough.  Then we tried a piece of plastic, but I didn’t have any way of drilling a hole for the axle that we needed to attach the leg to.

I mean this is a pretty sophisticated Godzilla, with little wheels embedded in his foot and tail so he can roll.  We figured out how to open the battery pack with a tiny phillips-head screw driver.  We replaced the batteries, but old Godzilla only lit up for a second and didn’t move and roared without much ferocity at all.

I got out my copper wire I used to use for making fabric sculpture armatures, an impressive array of wire benders and cutters, and my trusy old duct tape.  I cut and bent the wire, made a loop around the axle, and got an armature that would balance and make Godzilla stand by himself.  (Before he was propped up on his new friend Gamera).

I was trying to fashion three toes, but Noah went for a more practical foot and bent the wire himself. Then we wrapped it in duct tape.  I offered him acrylic paint, but he used a red sharpie instead.  I did some fancy folds and turns with the tape and Godzilla was standing on  his own.  I remarked how it looked almost like one of the prosthetic legs that runners use.  Noah agreed and wondered if we could add springs later so his Godzilla could outrun others. 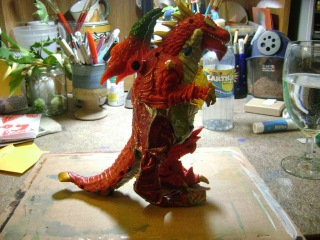 I love that about him.  He’s totally open to repaired toys and even can imagine an assistive device adding power to his beloved Godzilla.  I was having a high-pain and depression day before he came over, and this little exercise in toy repair was about the best medicine in the world.

He left Godzilla here and during the night, off and on, I heard this strange noise.  My husband was charging his phone and I thought maybe it was making strange noises.  I heard the sound again this morning after he left.  I looked on the toy shelf and there was Godzilla all lit up and roaring.  I pushed the blue button on the side of his neck to see if that would shut him off — and he walked!   His good foot rolls forward and the leg we made follows along beautifully.

I texted Noah’s mom that Godzilla had grown new powers during the night.  Noah was over in a flash. He was delighted and had no trouble believing that Godzilla re-charged and repaired himself during the night. Noah assures me Godzilla walks even better than he used to. And now, Noah’s looking around at old toys, boxes, containers and wire, coming up with ideas for new toys.  But first, he’s most interested in making a world for Godzilla to strut his stuff. 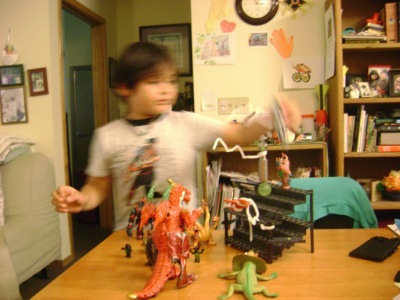 So who knows what creations lurk in the future?  We’ve already started repairing and enhancing a Ninja turtle.  If you’re ever depressed or blocked, if at all possible, collaborate with a child.  Your perspective will improve, I promise.