Editor Ryan Thompson took a trip to the Petrified Forest and its Rainbow Forest Museum, where a few letters of conscience were displayed.  Drawn to their “humor, heartbreak, and humility,” he began the project that lead to this book.  He sifted through 1200 letters, the first from 1934, that spoke of the misfortune that followed those who left the forest with illegal souvenirs. 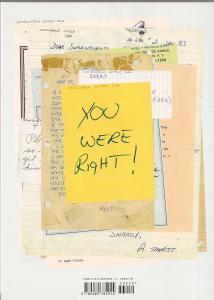 People are concerned that the rocks be returned to the place they were taken from, but because of “their unknown provenance, these specimens can not be scattered back in the park;” Thompson writes, “to do would be to spoil those sites for research purposes.  They are instead added to the park’s ‘conscience pile,’ which sits alongside a private gravel service road, a bit of dramatic irony that only furthered my interest in the phenomena.”

I can’t tell you how much this book delighted me.  It has several of my favorite elements – ephemera, stones, and space.  As it unfolds it becomes a poignant look at how people interpret the concept of luck.  What causes sorrow and hard times?  Throughout our lives, we are faced with many, many difficult situations.  Wouldn’t it be wonderful if it was as easy to solve as getting rid of a cursed stone?

The letters change as they move more towards the modern era, where an awareness of our impact on our natural resources and our parks is more defined.

There’s an insightful interview at the back of the book with Matthew Smith, Museum Curator at the Petrified Forest National Park.  He manages “an extensive collection of objects that encompasses one of a kind plant and animal fossils, cultural artifacts and the conscience letter archive.”  The way people remember the forest on return visits is skewed.  It reveals both the inaccuracy and the embellishment of memory.  The early managers of the forest have added to the confusion by manipulating photographs to “persuade the public to help them preserve the National Park and not see the wood disappear.” 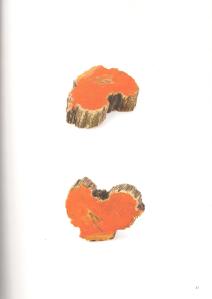 The layout of this book is gorgeous.  The photographs of the petrified wood on clean white space are breathtaking.  There are random blank pages that made me pause.  There is room in this book to ponder the material, the ephemeral nature of our letters and sorrows, and the permanence of the stones, no matter where they eventually land.

I so enjoyed reading the various hand written letters.  They’ve become rare in the past few decades and seeing them in all these different manifestations was touching.  I was fascinated by the types of paper and the way each letter was composed.  It felt like an archaeological expedition into the concepts of luck, confession, and even redemption. 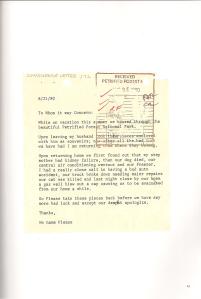 Bad Luck, Hot Rocks has a website where you can see some of the letters and photographs, but the book itself is most lovely and engrossing. 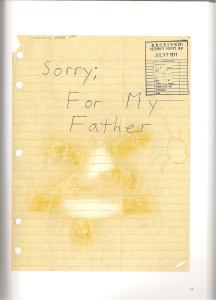 Ryan Thompson lives and works in Chicago, IL where he is an artist and Associate Professor of Art & Design at Trinity Christian College. His current research examines various powers humans ascribe to the events and ephemera of the geologic. His work has recently been included in Cabinet Magazine, Fotograf Magazine, Making the Geologic Now (Punctum Books), Reframing Photorgraphy (Routledge), and Format P Magazine. More at:  http://departmentofnaturalhistory.com/

Phil Orr loves building things, particularly out of the discarded, salvaged, unwanted, or forgotten. Much of his work focuses on these objects and the complex relationships surrounding them. He makes a living as a carpenter in Urbana, Illinois where he lives with his growing family.

Bad Luck, Hot Rocks is published by Ice Plant, an independent press based in Los Angeles that focuses on small print run artist books, with an emphasis on photography.  Their designs are impressive and result in books that feel good in your hands and your head. 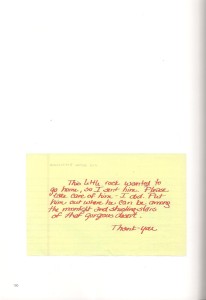