Skip to content
It’s increasingly difficult to find picture books that you can sit down and read with a child that takes more than 10 minutes to read.  I love many of these short books, and I realize that people’s relationship to time has changed, but I also love sharing a long story with a child.
The great thing about being an older person is that I have a little more time.  Folk tales and stories of the olden days are a particular pleasure to share because it gives the child a chance to ask lots of questions.  It’s also pleasure to introduce them to black and white illustration and different ways of using color.
I was delighted to see that the University of MinnesotaPress has reprinted 1941 book, Lief the Lucky, by Ingri and Edgar Parin D’Aulaire.  A big gorgeous book that tells the Norse folktale of Erik the Red and his son Leif the Lucky, and how they discovered Greenland and North America.
I often get books by mail, and when this one came in, I opened it in the lobby of my building.  One of my ten year old neighbors here at Bridge Meadows saw me opening the package, saw the cover and wanted to read it with me immediately.  (Bridge Meadows is a community that supports families adopting children from the foster care system, so it’s not unusual for me to have encounters with bored kids.)

I had the book, I had the time.  And I was as taken by the gorgeous and inviting illustrations as my friend was.  We sat in the alcove in the lobby where there’s a couch and we were both transported to an enchanted past, discovering uncharted lands, learning about the tribal nature of Norsemen and their customs.
Leif was raised by his father in Greenland, where he wrestled with polar bear cubs, watched the Norse gods race in the glow of the Northern Lights, then sailed out on his own.  He bestowed gifts to King Olav and on the way back he discovered “a beautiful land with forests of strange trees growing all the way down to the shores.”  The encounters with Skraellinger, the dark men, of this “Vinland,” were at first peaceful, but soon things degenerated.  The D’Aulaire’s poked a bit of fun at the battle that sent the Norsemen back home.  We also are told how some Norsemen evolved into Eskimos.
About every other page, my young friend asked a question.  Why did they need to take the dragon head off the boat?  What are Northern Lights? 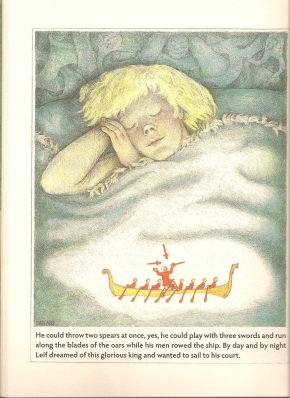 Why did the king punish the man for eating after the king had stopped?  We were introduced to strange new words and images.

I was so glad I took the time to read this book to my young friend.  I know he has a mild case of dyslexia and attention deficit disorder, so sitting with him, involving him in a longish (60 pages) book was more than magical.  I was so pleased to hear him request more books like this.

We were both amazed by the illustrations.  I wondered if they were pencil sketches with watercolor, but the technique was a little more complex than I knew.  I got this information on the D’Aulaire’s on the New York Review Books website:
Ingri Mortenson and Edgar Parin d’Aulaire met at art school in Munich in 1921. Edgar’s father was a noted Italian portrait painter, his mother a Parisian. Ingri, the youngest of five children, traced her lineage back to the Viking kings.
The couple married in Norway, then moved to Paris. As Bohemian artists, they often talked about emigrating to America. “The enormous continent with all its possibilities and grandeur caught our imagination,” Edgar later recalled.
A small payment from a bus accident provided the means. Edgar sailed alone to New York where he earned enough by illustrating books to buy passage for his wife. Once there, Ingri painted portraits and hosted modest dinner parties. The head librarian of the New York Public Library’s juvenile department attended one of those. Why, she asked, didn’t they create picture books for children?
The d’Aulaires published their first children’s book in 1931. Next came three books steeped in the Scandinavian folklore of Ingri’s childhood. Then the couple turned their talents to the history of their new country. The result was a series of beautifully illustrated books about American heroes, one of which, Abraham Lincoln, won the d’Aulaires the American Library Association’s Caldecott Medal. Finally they turned to the realm of myths.

The d’Aulaires worked as a team on both art and text throughout their joint career. Originally, they used stone lithography for their illustrations. A single four-color illustration required four slabs of Bavarian limestone that weighed up to two hundred pounds apiece. The technique gave their illustrations an uncanny hand-drawn vibrancy. When, in the early 1960s, this process became too expensive, the d’Aulaires switched to acetate sheets which closely approximated the texture of lithographic stone.
In their nearly five-decade career, the d’Aulaires received high critical acclaim for their distinguished contributions to children’s literature. They were working on a new book when Ingri died in 1980 at the age of seventy-five. Edgar continued working until he died in 1985 at the age of eighty-six.
This book will delight anyone interested in book arts and illustration.  The University of Minnesota has also republished the D’Aulaire’s Children of the Northlights, and Ola, both of which I look forward to.
Leif the Luckyis a great book to share with someone on a cold winter night, or a warm summer one, or in an apartment lobby, where it might transport you to a new world, an old world, and a place of enchantment.