Do you like stories, cats, and children?  If so, you may be as charmed as I was by the book The Five Lives of Our Cat Zook, by Joanne Rocklin, Amulet Book, 2012.

“Our cat’s named Zucchini, and we call him Zook, but that’s not the most important thing about him.  And neither is the INCREDIBLE fact that he’s got seven toes on each front foot and six on each one in the back for a total of twenty-six…His eyes are blue, like old faded jeans, and his coat is dark brown.  But when he’s lying on a sidewalk scratching his back, you can see some white markings shaped like the state of California on his belly.  And some black tufts in the spot where Oakland is, which where we live.  One corner of one ear is clipped off.   He’s got shaky teeth, black gums, and breath that smells like the restroom in the Chevron station – a smell we love, because it’s Zook’s.”
Thus 10 year old Oona begins her tale of the illness of her cat. (If you want to know the most incredible thing, read the book).  She’s a consummate storyteller, living in her imagination and helping her younger brother Fred understand life through her stories.  When Zook gets ill and has to be stay at the veterinary hospital, she convinces Fred that cats really do have 9 lives and Zook is only on life 5.  She proceeds to tell the tale of these former lives and to reveal much about herself, her fears and her confusion, as she fabricates her whoppers.
Oona has a Rainbow Whopper Theory: “That’s another important thing about me, and I have to admit it, even though it doesn’t sound so great.  I tell whoppers.  Whoppers are lies, plain and simple.  Some whoppers are worse than other whoppers, and those are nothing to be proud of.  But some whoppers are stories.  Those are the good kind.  Thinking about different kinds of whoppers can get very complicated and make your brain jump around in your skull, so it helps if you attach colors to them.”
She proceeds to tell the difference between Blue, Red, Black and Yellow whoppers.  But the big true story of her life is that her father died of cancer a few years back.  Now she and Fred are faced with the possible death of their cat and though she is a caring and only slightly manipulative sister, the prospect of losing Zook is very scary.  She has built a whole story for herself about rescuing him.  She had built stories about her mother, her friends, her shirt (she wears the same one every day), her beloved neighborhood, and “the villain.”  The changes that are occurring around her are shattering her little rainbow of theories, the villain is getting too close for comfort,  and she is doing all she can to keep it under control.
This is such a good story.  It flows from page one.  Rocklin uses the power of story and folktales in clever  and seamless ways. 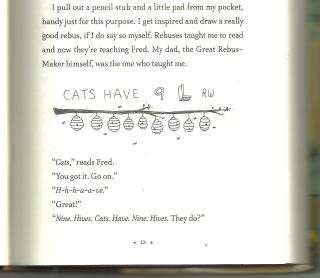 There’s a lot in the narrative on how we use language and grammar to change meanings.  Oona’s father taught her how to read with rebuses (something I hadn’t seen in years) and now she uses them to teach Fred.  The book is illustrated with them and they add another facet to Oona’s character.  Rocklin slyly works magic by using puzzles of language to further the development of Oona’s story.
Serious themes of life and loss, community and family are played out but Oona’s voice is so compelling and authentic, you are only aware of that you are being told a fantastic story.  I think of it often now, it sticks like any good story where the character shines.  I highly recommend this book.  It’s marketed for 8-13 year-olds, a middle grade reader, but it’s written for everybody.  I can’t wait to read her other books.
You can read more about Joanne Rocklin on her blog here:
http://www.joannerocklin.com/index.htm
And you can see a trailer for The Five Lives of our Cat Zook here:
http://www.youtube.com/watch?v=GFLF_KUPuIs

I haven’t talked about any picture books in a while, but this week I got a chance to read two that I really wanted to share.  The first is the beautiful and poetic Dave the Potter: Artist, Poet, Slaveby Lavan Carrick Hill, and illustrated by Bryan Collier, 2010.  Dave was a potter who lived in South Carolina in 1800s.  Little is known about him but his pots have survived and now fetch extraordinary sums.  The author found out about him through an Antiques Roadshow appraisal for one of his pots.  Dave was one of the few potters of his time with enough strength to make large vessels, sometimes working with 60 lbs of clay at once.  He inscribed little poems on his pots.  No one knows how he learned to write and it wasn’t safe, it was illegal for a slave to learn to write.  Still, on some pots, he began to make his mark with haiku like poems:
Dave belongs to Mr. Miles/
wher the oven bakes & the pot biles //
–July 31, 1840
Bryan Collier’s beautifully illustrates Dave with a combination of painting and collage.  His paintings of Dave are striking, especially the hands.  The story follows Dave through the making of a pot, and the tale unfolds like a poem.  Appendixes delve deeper into his life and history.  A bibliography is provided.  This is a subtle, powerful and beautiful book.

Miss Dorothy and Her Bookmobile by Gloria Houston, Illustrated by Susan Condie Lamb, Harper, 2011, tells the story of Dorothy Thomas who started a book mobile service in rural North Carolina, in the Blue Ridge Mountains.

There was no brick and mortar library, and Dorothy, a Radcliff graduate and librarian, couldn’t bear it.  She got the community together, raised money, stored books in her basement, and drove around the community bringing sought after books to everyone, including the author when she was a girl.  Delightfully told and illustrated with beautiful watercolors, this is a pleasure for anyone who loves books, libraries and bookmobiles.
Hope you get a chance to read one of these books, or something else you really enjoy.
I wanted to share with you one of the new trends in book distribution, the Little Free Library, one of which opened in my neighborhood in north Portland, Oregon. 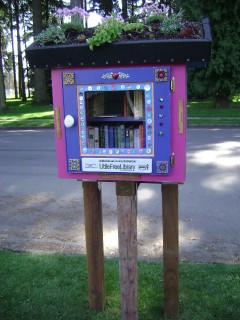 These book stations are a new development for distributing books.  In a world where everyone seems to be getting more isolated, these generous little libraries are a great antidote that help build community.  You can read more about the Little Free Library movement here:
http://www.littlefreelibrary.org/
A book is always there for you, no batteries required.

Here are links to order today’s book from Amazon.com.  I am an affiliate with them and get a small small fee at no cost to you if you order through this link.

2 thoughts on “Cats, History and Libraries”