I’m reposting a story I wrote for International Literacy day a few years ago, which was September 8, this year.  I didn’t get a chance to post it then because I was involved in a writer’s workshop, which is one of the wonderful places that literacy leads you.  Once you realize the beauty and power of words, how can you resist writing your own story?  I read an article recently that talked about how readers develop a stronger sense of empathy, fiction readers in particular.  I’ve always thought reading fiction and poetry was the best and most accurate way of gaining the perspective of someone completely different than myself.  It’s like living in someone else’s head.

International Literacy Day is a cause that’s very close to my heart because I know that if I hadn’t learned to read, I probably wouldn’t be alive right now.  Just about everything I know, I learned at the library.

The following story was written for a performance at the Central Library in 2010. I got to tell a 5 minute story.  In my enthusiasm for the subject, I wrote a 20 minute story and had to edit edit edit.  I think it’s a good idea to edit, but sometimes I just like to take my time, go off on tangents and be discursive and inclusive, so here is the long version of that story.    I hope you enjoy it! And if you find yourself hankering for something more — visit the library where a whole worlds are available in neatly bound books.

Love at the Library
The library has always been my favorite place, ever since first grade.  My interest in books came before I can remember.  It was kind of an odd way of learning to love them:
My earliest exposure to books was through punishment.  My father had two children’s books.  One was a book about all the terrible fates awaiting bad children.  I hated that book.  The pictures were graphic and awful – the girl who cried too much had her eyes fall out, the boy wouldn’t stop sliding down the stair banister came completely apart and his head, arms and legs went flying off his fat torso.  Spoiled children who played with matches, didn’t eat their vegetables or  didn’t comb their hair had all kinds of terrible things happen to them.  We knew we’d been bad anytime my father came armed with that book. 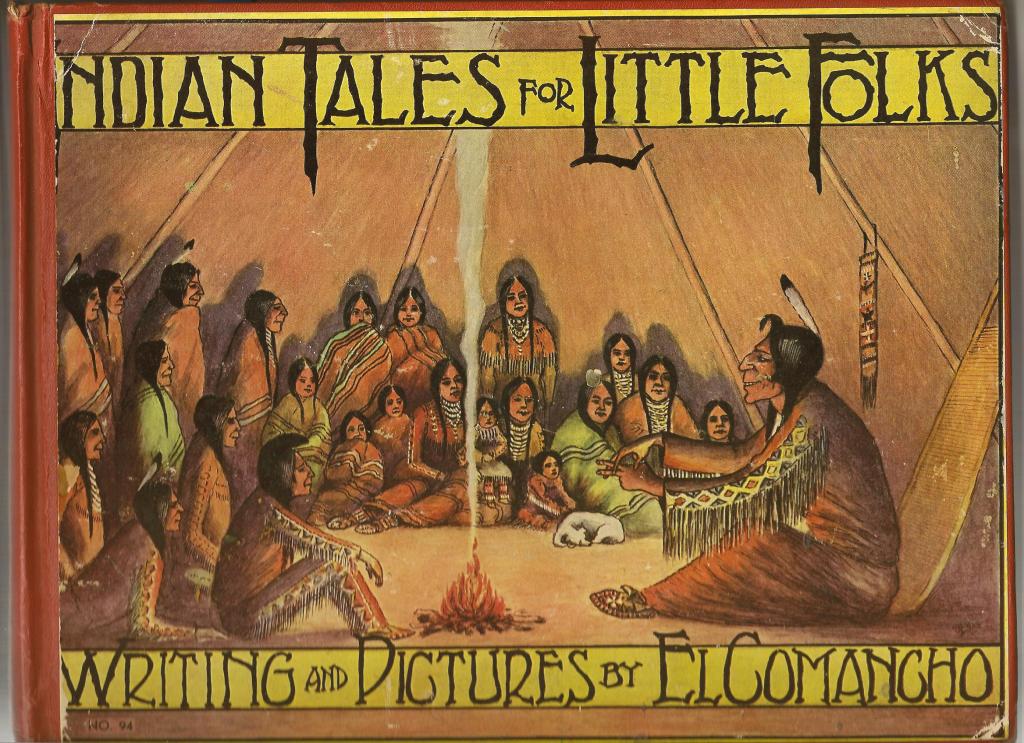 The other children’s book was Indian Tales for Little Folks by El Comancho.  I liked it much better, although I didn’t get to hear the stories as often.  It had some pretty scary pictures, too.  But they were about animals and Indians, not bad children.  Mysterious words and symbols sparked my imagination almost as much as the great pictures.
Both of these books were antiques and we kids were not to touch them.  They were old and fragile and we were young and wild.  My father kept them tucked away in his room.  If I had only ever seen the book on bad children, I wouldn’t have cared.  But just as soon as my father went to work, I would sneak into his room and find the Indian Tales.  I also discovered he had a collection of world travel and art books.  So while my brothers and sisters were out playing, I was squirreled away with picture books making up stories about them.
I was so happy when I got to school and learned to read.  For one thing, I got introduced to a lot more books, and even though Jane, Dick and Spot seemed rather unadventurous to me, I used what I learned to decipher the much more exciting tales in Indian Tales.  I was delightfully surprised that El Comancho told much better stories than me.  See, I thought this guy was kissing the boo-boos of the animals, and the real story is that he’s a god and breathing life into all the animals in the world, animals he created from clay. 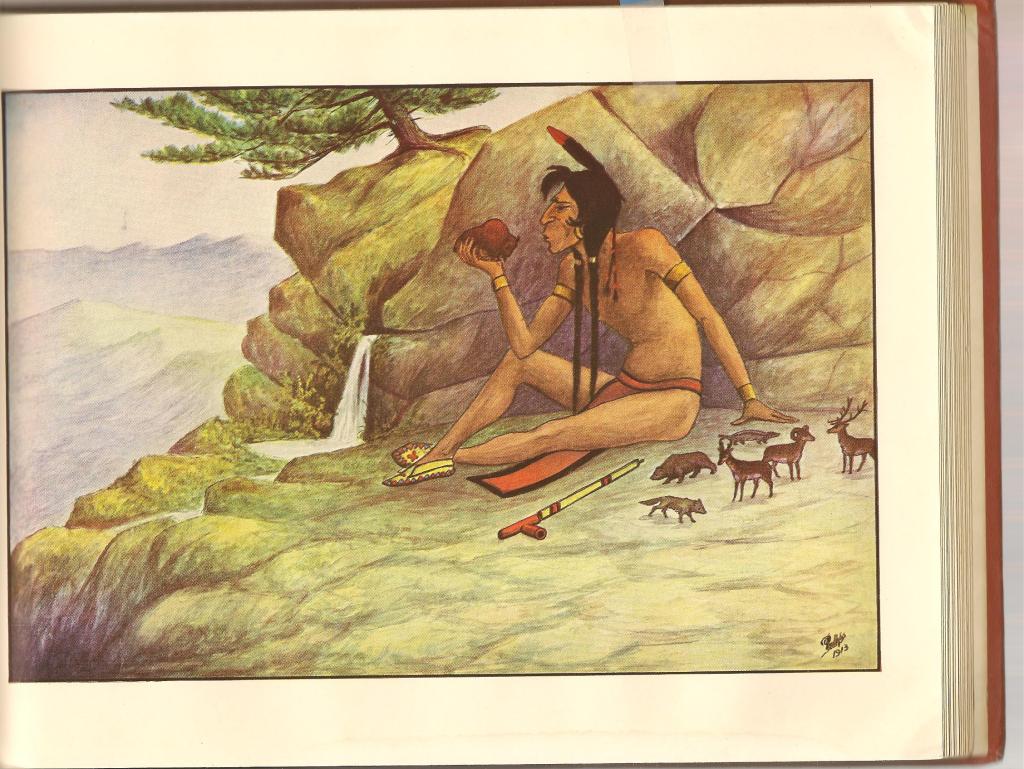 After I learned to read, I found the world was full of places where people did marvelous things like build pyramids and sky scrapers, worshiped all kinds of cool gods, wore beautiful exotic clothes, looked different, ate different food and had different languages.  But they all told stories.
My parents were not really suited for each other and by the time I was reading really well, they were fighting a lot.  I was a little bit unhinged by it all and never quite figured out how to play well with others.  I was shy and nerdy and loved school.  Something about the order of it all made me feel secure.  And at school, you could spend time in the library where there were so many books you could never possibly read them all.  I was not a speed reader, I read slowly but I loved it.  And there were oh so many picture books where the world was bright and beautiful, fluid and often funny. I was never lonely; I always had stacks of books as my friends. 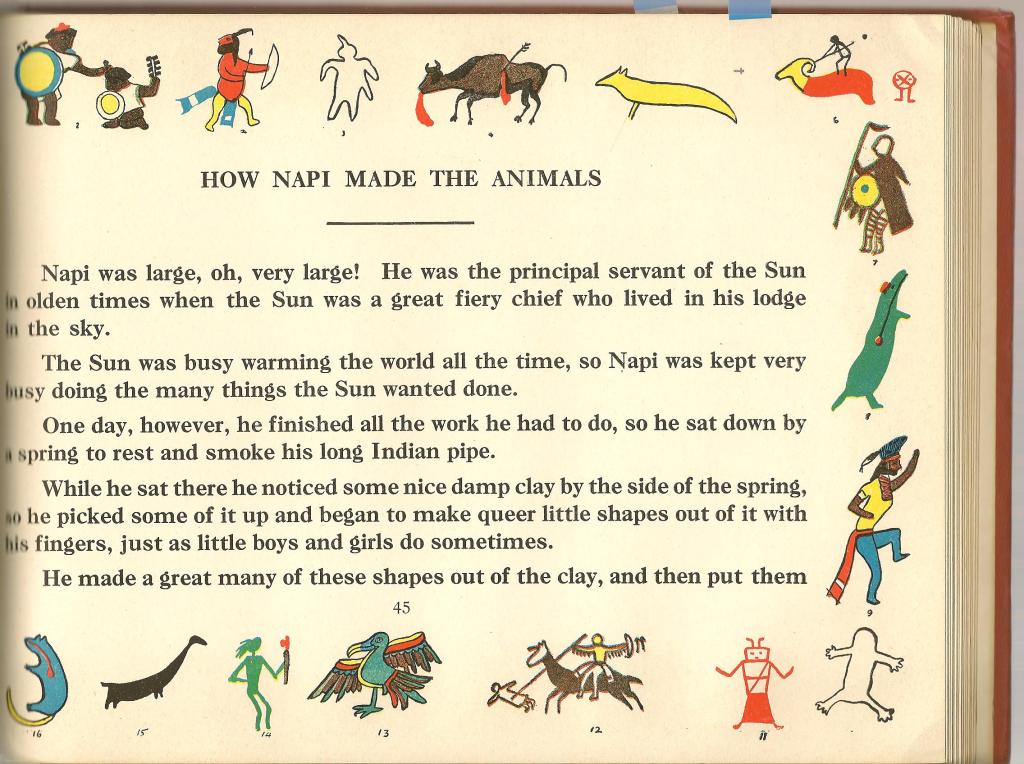 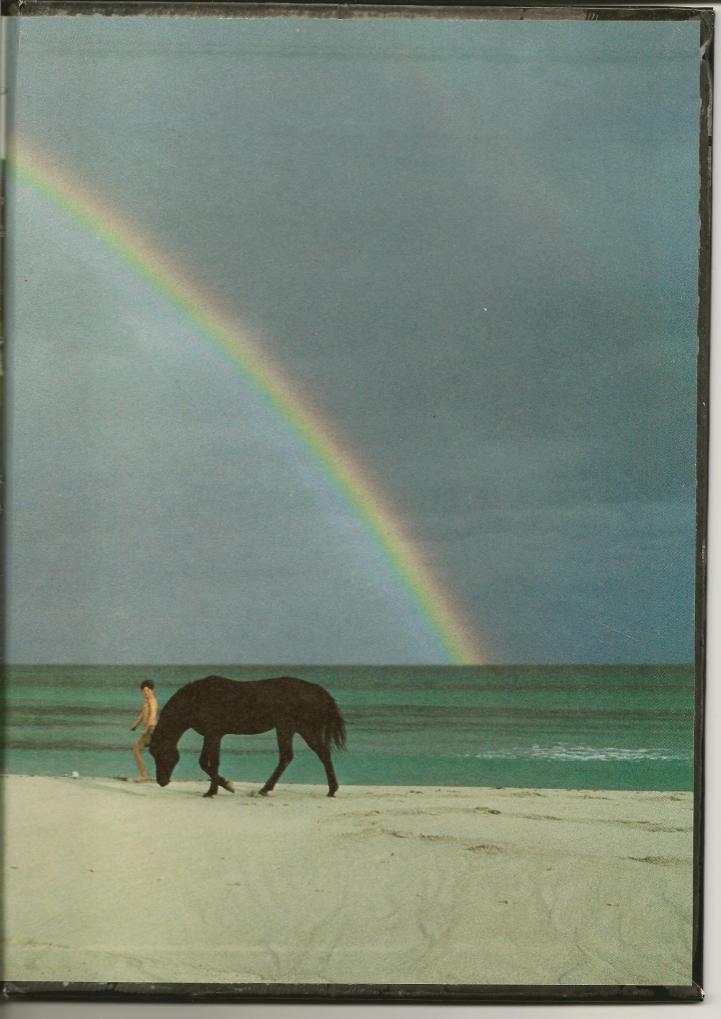 The shirt was still damp and stained when it was time to go the library, but I thought it was the best looking of all my shirts.  I decided if I held the book against my shirt just so, he’d never see the stain, only the pretty cuffs and neck line and pearl buttons.  I put it on and dashed away to the library.
It didn’t occur to me that when I turned in the book I’d expose myself, stain, hole and all.  It didn’t occur to me until I placed the book on his counter and pronounced “This is the most mature book Walter Farley has ever written.”  And that boy laughed out loud.
“Good Lord, Curly Top, who you been fighting today?   I’d hate to see the other girl, or did you beat up some poor boy?”  He could have stopped right there, but there was a gaggle of teenagers around and they laughed so he just had to go on.  “Don’t you have another shirt?  You wear that old raggedy thing everyday.  You’d be pretty cute if you’d change your clothes once in a while.”
I turned pink, then red then ran out of the library.
I got all the way to the edge of the park before I collapsed into tears.  It didn’t take me long to realize that I was going to have to blow my nose, and I didn’t have a Kleenex.  I was going to have to blow on my shirt.  My favorite shirt.  My favorite stupid raggedy shirt.  I was just getting ready to blow, when a Kleenex appeared before my eyes.
From Sarah.
I took the offered gift and blew.  I knew I would have to explain everything, my tears, my shirt — and no I didn’t have another one — and my whole miserable life.  I took a deep breath but before I could get out word one, Sarah said.  “I think you forgot it’s your day to feed the fish.”
“I didn’t forget,” I sniffed.  “I’ll do it after Chris leaves.  He…”
“He’s a trifling little fool is what he is.  You know he can’t even understand the Dewey decimal system?  I have to write out where the books go every time.  I swear that boy needs a map to find his own head.  I’m glad we’ve got smart girls like you coming in to help with the fish.  If he had to feed them, they’d all be fish sticks by now.  He’s just jealous because you’re smarter than he’ll ever be.  And those fish are hungry now.  They’ve been asking for you.”
I rolled my eyes.  “Fish can’t talk.”
“I didn’t say they talked.  They just keep coming to the front of the aquarium and looking.  You should have seen them light up when you walked in.  Now they’re all depressed and sulking down by the sunken treasure chest.”
I laughed.
“You don’t believe me?  Why don’t you come see for yourself.”  She took another Kleenex out of her pocket and wiped my face and stroked my hair.  “You look real sweet today.”
I followed her back in the library and as I did I told her about the Black Stallion’s Ghost.  She said she thought the same thing when she read it.  She got me a book of African American Myths and Legends.  “Tell me what you think about these stories.”
She never said word one about my shirt.  It just wasn’t as important to her as what was going on in my mind.
The rest of the summer I stayed in the children’s library and Sarah always had some magical mythical book for me to read and would always ask me what they meant to me.   I read tales from exotic places like Brazil, Mexico, Japan, China and even far away Canada. I felt like a librarian by the end of the summer.
The first Saturday after my first week in 7th grade, I went to the library in my brand new back-to-school clothes and that boy was there.
He said, “Hey Curly Top, looking sharp.”  But I had no time to talk to him, I had to show Sarah my reading list and all the grown up books I’d get to read.  She didn’t say anything about my clothes.   She said, “I want you to come here every Saturday and tell me what you think of each one of those books.”
Unfortunately, right after that, we had to move again.  I used to feel really bad that my mom didn’t give me a chance to say good-bye to Sarah.  However, when my momma got it in her head it was time to move, she just packed us all up and we were gone.  Now that I’m older and a life-long reader, I know it wasn’t as important to say good-bye to Sarah as it was to spend the time there with her in first place.
Like so many librarians, she was there to help out kids when she could and encourage the love of books.  And her help stayed with me all my life.  Just like the stories stayed with me, the words I read, the meaning I found.  The meaning I find in every book remains with me.  And the librarian’s spirit stays with me so that no matter how poor I am or what troubles I have, I know there are books at the library to help me, delight me and make every day an adventure.