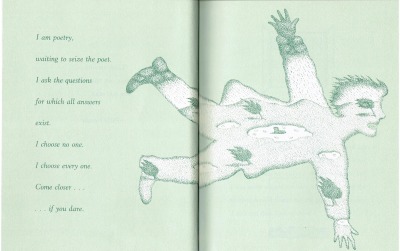 July 12th is the birthday of Pablo Neruda, a poet I’ve loved as long as I can remember.  I don’t remember how I came to find his poetry.  Maybe it was from my 8th grade Spanish teacher.  Maybe it was from browsing the library’s poetry section. Back in the 1970s, they had a bi-lingual anthology of Neruda’s work that I checked out over and over again.  I think I made a few pencil marks in the book, faint reminders to my future self, and to any other library patron, that I was moved by an image.
Now, each year, on his birthday, I try to buy a book of poetry.  Because I have a limited budget, I often use the library or buy used books.  But I want to support the writers somehow.  I especially want to support poetry because it’s such an under-appreciated art form. 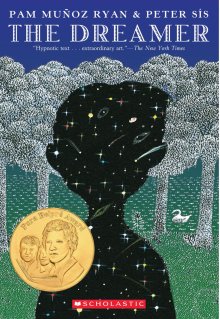 This year, I decided to buy The Dreamer, by Pam Munoz Ryan, illustrated by Peter Sis.  It’s a fictionalized novel of Neruda’s childhood.  I say fictionalized but that seems limited – it’s an illuminated, poetic, intense, magical story of Neftali Ricardo Reyes Baoalto, the son of railroad manager, born in Parral, Chile, in 1904.
His father was a stern man who could barely tolerate his son’s dreamy ways.  Neftali changed his name in his teens when he began publishing poetry he knew would embarrass his father.  Neruda became one of the most beloved and most read poets in the world.
Ryan’s book is about how Neftali grew up able to capture words and images and create poetry.  She was enchanted by a story Neruda told of a mysterious happening when he was a child.  He was playing alone along a fence of an abandoned house.  A child’s hand passed a toy through the hole in the fence to him.  He returned the gift with a marvelous pinecone he’d found deep in the forest.  Later, when he searched for the child, he found the house still abandoned, no sign of the child or any living being.
Ryan says: “That anecdote captivated me and lead me to Neruda’s essays and memoirs, which led me to his forays into the rain forest and his trips to the ocean, and to the story of the swan….  Ultimately his poetry led me.  And I discovered The Book of Questions.  Neruda’s spirit of inquiry was contagious and inspired me to create the voice of poetry and the questions in my text.”
This book reads like narrative poetry.  The story slips in and out of dreams and imagery.  Young Neftali collected shells, seed pods, keys, beetles — any little spark of a thing that he could manage to carry home.  Though he stuttered and had little success in communicating with his father, he collected words.  He copied new ones onto slips of paper and kept them in a drawer.
“Neftali grabbed a book from the bedside table.  Even though he did not know all of the words, he read the ones he knew.  He loved the rhythm of certain words, and when he came to one of his favorites, he read it over and over again: locomotive, locomotive, locomotive.  In his mind it did not get stuck.  He heard the word as if he had said it out loud – perfectly
Neftali climbed out of bed, retrieved a pencil and paper, and copied the word.
LOCOMOTIVE.
He folded the paper into a small square and put it in a dresser drawer already crammed with other words he’d written on tiny doubled over pieces of paper.  Then he crawled into bed.
Father’s question from yesterday found its way into his thoughts.  “Do you want to be a skinny weakling forever and amount to nothing?”
The words in the draw shuffled.  The drawer opened.  The small pieces of paper floated into the room and arranged and rearranged themselves into curious patterns above his head.
CHOCOLATE, OREGANO, IGUANA, TERRIBLE, LOCOMOTIVE
Neftali sat up, rubbed his eyes, and looked around the room.  The words were no longer there.  He slid from the bed, tiptoed to the drawer and opened it.
All of the words were sleeping.” 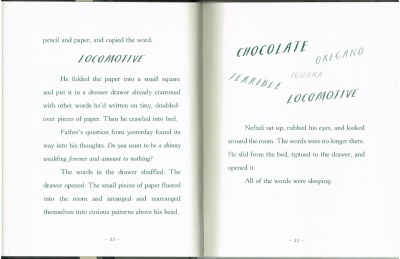 The Dreamer’s layout and typography is poetic in its own right.  The illustrations by Peter Sis are breathtaking.  They have a whispery quality, like poetry’s insistent whisper in Neftali’s life. 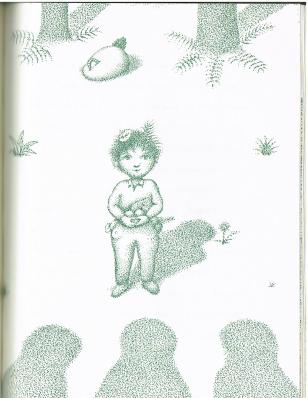 There are the usual full page illustrations, but Sis’s style influences the layout of the story itself.  The results are visual poems. 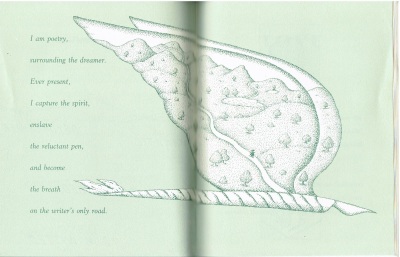 “The words he had written wiggled off the page and escaped from the drawer.  The letters stacked themselves, one on top of the other.  Their towers reached higher and higher until they stood majestic and tall, surrounding Neftali in a city of promise.”  The following page: 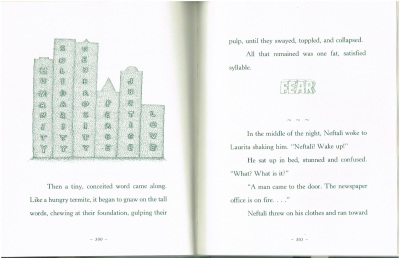 I’ve read this book several times, checked it out from the library often, just as I did as a teenager with Neruda’s poems.  His images strengthened me in times of struggle, made me notice what I would have otherwise overlooked.  Ryan illuminates how nature and words strengthened Neftali, despite his father’s relentless bullying.  There’s true redemptive magic in the world, but it’s often hidden in small gifts from nature, simple and complex at the same time.  Ryan weaves this story well and Sis expands it into infinity.
The Dreamerwon the 2011 Pure Belpre Award for fiction.
Pamela Munoz Ryanhas written over thirty books for young people, from picture books for the very young to young adult novels, including the award-winning ESPERANZA RISING, BECOMING NAOMI LEÓN, RIDING FREEDOM, and PAINT THE WIND. She is the National Education Association’s Author recipient of the Civil and Human Rights Award, the Virginia Hamilton Award for Multicultural Literature, and is twice the recipient of the Willa Cather Literary Award for writing. She was born and raised in Bakersfield, California, and now lives in North San Diego County with her family.
Her latest book, Echoes, is the tale of an enchanted harmonica, which I’ve read, loved, and will review soon.  You can read more about her here.
Peter Sis is an illustrator and author of many gorgeous books.  He is a MacArthur Fellow, a Sibert Award winner, and three time Caldecott Honoree.  His picture books include Starry Messenger: Galileo Galilei, The Red Box, and The Wall: Growing up Behind the Iron Curtain.  His most recent book is The Pilot and the Little Prince: The Life of Antoine de Saint-Exupéry, another charming must-read. He lives in New York.  You can find out more about him here.
(There’s a great picture book about Pablo Neruda for children of all ages.  Pablo Neruda: Poet of the People by Monica Brown, illustrated by Julie Paschkis.  Maria Popova of Brainpickingsdid a wonderful review of it and you can read about it here.)
All of this celebration of Neruda prompted me to find my oldest copy of his work.  It’s $5.95 paperback that fell to pieces when I took it off my shelf. 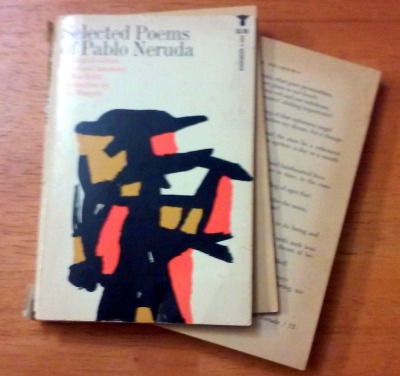 It’s been mine for about 30 years and was used when I got it.  I browsed through crumbling pages the color of graham crackers, that smelled of libraries, suitcases and dust.  I thought about how much Neruda treasured old things that bore the imprint of nature as it transforms us all to her bidding.  I think I’ll try to keep it another 30 years – along with my other Neruda books and my new copy of The Dreamer. 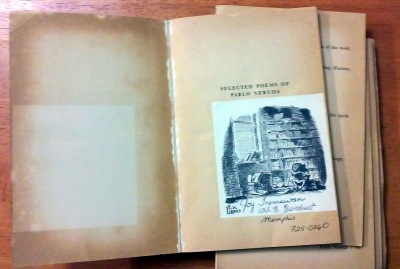 Fill your life with meaningful words and images.  Thanks for reading my blog.

2 thoughts on “Pablo Neruda The Dreamer”