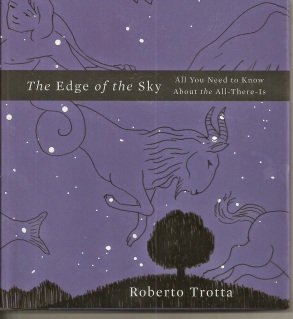 I had some instant cultural gratification at the beginning of the month.  I’d just read a review of The Edge of The Sky: All You Need to Know About the All-There-Is, by Roberto Trotta.  Trotta is an astrophysicist at Imperial College London, where he studies dark matter, dark energy, and the early Universe.  The very next day I found out he was giving a talk and book signing at Powell’s Bookstore.
Astrophysics is not something I understand, but every time I look at the night sky, I wonder at its vastness, its origin, its story.  What I read about it is not always understandable.  I can absorb creation myths and stories much more easily.
There was nothing, then there was something – a god, a turtle, a raven, a cold moon, a lonely sun, a big flash.
Trotta believes that anyone should be able to understand what astrophysicists are discovering about the universe.  So he decided to write a book about it using the 1000 most common words in the English language.  He was partially inspired by the 6 word novel that is attributed to Hemingway:
“For sale: baby shoes, never worn.”
Trotta began to think about simplifying his own language to make what he studies more accessible and immediate to everyone, not just PhDs.  He found a list of the 1000 most common words in English online and began the challenge of working within the limits of those words.  His goal was to make cosmic science easy to understand and spark a sense of wonder.
The result is a slim volume – only 85 pages – that tells a story about what is known in modern cosmology through the eyes of a female student-person.  Words like scientist, telescope, and even the names of planets aren’t on the list, so he created hyphenated words to describe things.  The student-person is looking for far-away star-crowds with a big-seer on the home-world.  Through her ruminations, we learn the mysteries of the All-There-Is (universe) and our place in it.
So instead of being a dry, hard to understand text on astrophysics, he created a book that is poetic and similar to ancient creation tales. The voice that emerged from the lexicon eventually became one that sounded more like mythology.  He was able to use about 707 words.  Each brief chapter starts with a haiku like poem, where he used only a 63 word lexicon.
In the clear night
Her dark hair
Mirrors the stars
Behind the stars
Space-time grows
Silent
A soft song
Might tell you
Dark stories
To further enhance the book’s beauty, it’s illustrated by Antoine Deprez. 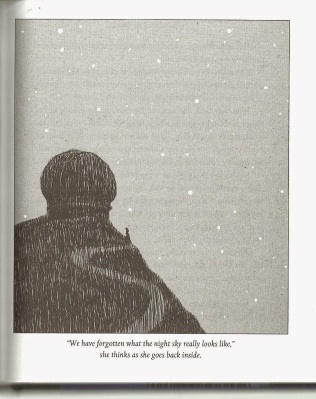 Trotta said he wanted to speak not only to people’s brains, but their hearts.  He wants to share his enthusiasm for all that is being discovered – and how amazing it is that each answer to a question about our universe leads to more questions.  It helps, I think, that he’s fluent in several languages, including his native Italian.  I believe knowing several languages helps put a spark in how you use each one, and results in delightful new ways to speak and write.
In his quest to help people understand things like the expanding universe, he showed a slide from his Scientist in the Kitchen presentation.  The universe is the dough and the olives are the galaxies.  See how they grow further apart as the dough rises.

Reading the book was a real pleasure, but it wasn’t simple.  The universe is a complex place, and for me, the concepts are still hard to understand.  There’s a section at the end where expression are explained, and that helps. I’ll read the book again though, because it doesn’t make me feel dumb. I feel like my mind is expanding.  It’s like other tales of creation, you read them, you think about them, you read them again.  Your heart fills with wonder.  It’s a miraculous universe, no matter how you talk about it.
Someone in the audience asked Trotta if he’d done research to see if people understood it correctly, that they got his references right, and understood the “real” concepts of astrophysics.  Trotta said he wasn’t so much interested in people getting it “right,” as he was in sparking people’s curiosity.
I can see this book being used in high school and freshman college physics and astronomy classes.  It’ll keep the enthusiasm alive when the density of text books leave students red-eyed and depleted.
Trotta’s reading and discussion was elevating in every way, but in line to get my book signed I scanned the list of 1000 words at the back of the book.  The F-word leapt out at me because life doesn’t want me lingering in the stars too long.  So I looked to find other “dirty” words because that’s the kind of girl I am.  There are a few more, but not as many as I hear on an average day riding the bus.  None of them found their way into Trotta’s story.
When I got to speak to him, he was warm and friendly.  I told him that I hoped to share it with the children I mentor here at Bridge Meadows.  They come from small worlds with small vocabularies.  I’m trying to help them expand their view of the world and ways of expression.  I hoped his book would be a good tool for that.
Trotta is very interested in how people respond to his book and urges readers to contact him through Twitter.  This book is a whole new direction in his life, and he wants feedback.
I’ve since read part of it to a 10 year old boy who I help with art projects.  He got a dreamy look as I read the names of the planets: She-God of Love, Fight-God, Head-God, Great-Father-God.  I read to him of Far-Seers and Crazy-Stars.  I showed him the illustrations and he was fascinated by the picture of dark matter passing through a hand dipping a fork into spaghetti.  He had LOTS of questions that I couldn’t always answer, but it definitely awakened his curiosity.   We talked about Greek mythology, space-travel, and, since he was 10 years old, space aliens. 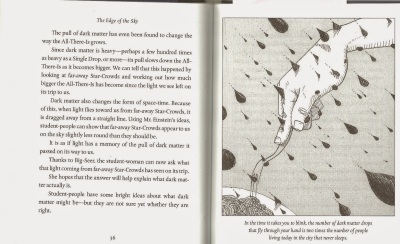 When I left the reading by Trotta, it was a clear crisp autumn night.  I looked up and saw a few stars that were bright enough to pierce city sky.  The sky was full of mysteries but even though I knew the universe is expanding, with the book in my hand, everything seemed cozier and closer.
We often feel like we, as a species, know everything — there’s little left to discover.  But that’s an illusion.  There’s a whole universe in each fragment of sky that has yet to be discovered.  How will those stories be told?  Perhaps more will be told like The Edge of the Sky, in a language we can understand and cherish.
You can see a presentation by Robert Trotta on his book by clicking here.
His twitter tag is

If you missed my last post on the delightful book Arnie the Doughnut, you can read it by clicking here.
Thanks for reading my blog.  Let me know what you think and if you like it, share it.